Why are relatively so few New Zealand managers achieving at this level?

International research has for many years shown that the single greatest impact on the productivity and performance of a team is the leadership styles and behaviours of the team leader, the climate and culture this creates within the team, and hence levels of staff buy-in and engagement.  This is true for first level teams right through to Executive Leadership Teams.

Research by Towers Watson in 2011 focused on utilising their 8 million person and 700 organisation database to identify the absolute top performing teams and units.  Their results, based on factual operating margins, showed that while fully engaged teams delivered on average twice the performance of disengaged teams, the best teams were on average three times more productive. 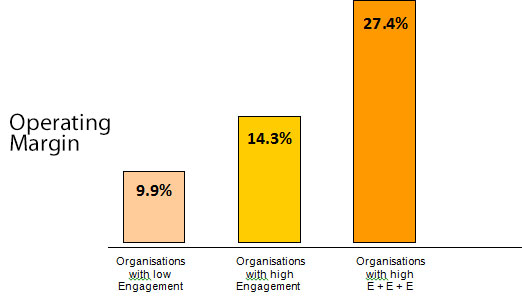 Further research on these results by Gostick and Elton to understand the dynamics of these great teams identified that their managers create a culture of total belief with their people in the vision, purpose, values and goals for the team, and high trust in themselves as leaders.  As a result, people in these teams are inspired to “give their all” and willingly provide the discretionary effort and passion that delivers brilliant results.

People in these teams were identified as being high in the 3 Es – fully Engaged, Enabled, and Energised.

Staff who care about the organisation and its mission and values, who willingly give discretionary effort, who take pride in recommending the organisation to others, and who have a clear sense of their contribution’s value to the greater organisation.

Staff who feel they work in an environment that positively supports their productivity and performance.  They are provided the right tools, well defined processes, information, learning, clear direction and prioritisation of work, flexibility in how the job is done, and help with overcoming obstacles or challenges.

Staff who feel the organisation and leaders genuinely care about their physical, emotional and social well-being.  Staff have strong trust in their managers and feel regularly acknowledged and valued for their efforts and achievements.  They operate in a very open communication environment, within a positive supportive team culture.

Other international research adds to this picture –

So … Why are not more of our managers creating this culture of belief, strength in the 3 Es, and sustained great results?

We recently posed this question to a forum of experienced OD and HR professionals.  We have combined their views with our own research findings, observations and experience.

So … what has the greatest potential to achieve organisational breakthroughs to greatness?

We don’t believe there is a single silver bullet, but here are some thoughts:

From the top – because experience clearly shows that few if any organisations achieve greatness without great leadership at the top.

While we look to top leaders to provide the vision and strategic thinking necessary to ensure clear and successful direction, their most profound impact is to inspire and enable self leadership to flourish throughout the organisation, and particularly with the managers.

From the bottom – because if the single biggest impact on a person and team’s performance is their direct manager, and with 70 – 90% of staff in an organisation reporting to first line managers, then the impact of first line managers is huge.

While organisations depend upon the technical skills of their professional staff, it is their manager who will determine whether these are harnessed to their true potential, or not.

Leadership development needs to firstly build a leadership mindset – an understanding that leadership and management’s primary focus is to create a culture and environment that inspires people to achieve to their true potential and deliver the desired organisational vision, results, and delighted customers – and what they may personally need to be to achieve this.

Also how to shift their mindset, values, time focus and skill sets as they transition up the management ladder.

And to have these competencies underpinned by a leadership mindset of achieving brilliant results by creating a culture that inspires and enables people to achieve their true potential, and deliver to their best, everyday.

The coaching needs to be coachee centric and help them achieve their own true potential and aspirations, rather than the common ‘coaching for performance’ focus which leaves coachees feeling it is only about the organisation’s needs, and if I need coaching then I must have a problem and be under-performing.

We need performance management systems and processes that motivate and inspire people to want to lift their performance across the full spectrum from poor performers to super stars.